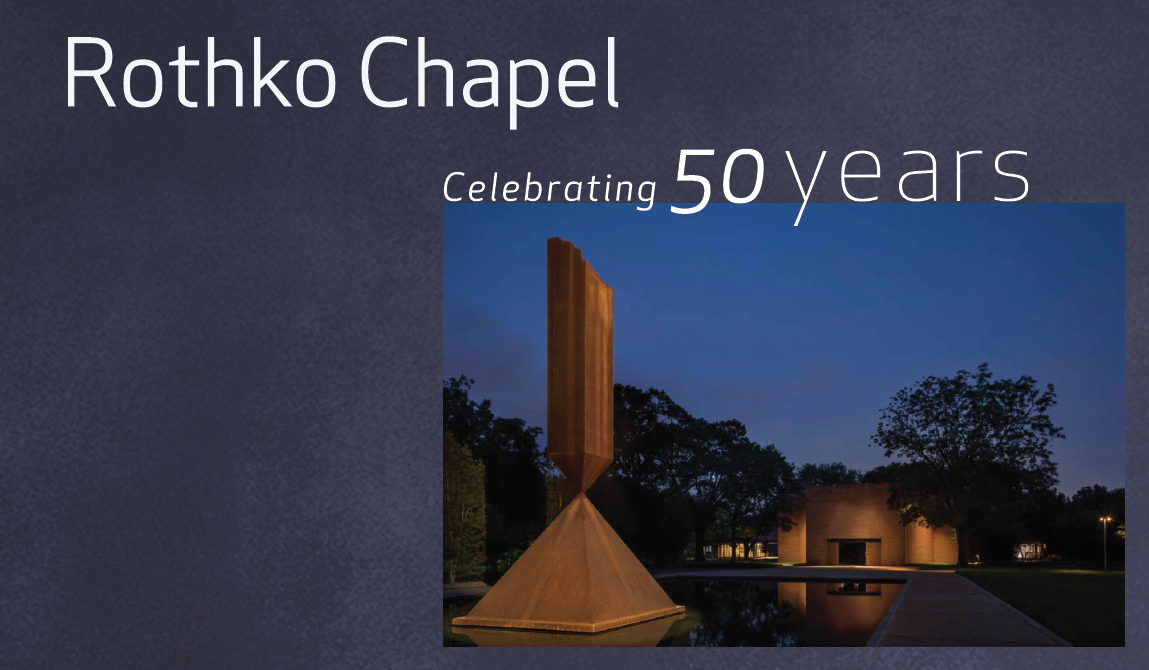 This year, the Rothko Chapel celebrates 50 years as a landmark of modern sacred art, as a celebrated site for transformative and inspirational experiences, and as an organization working at the vanguard of human rights, and social, racial, economic and environmental justice.

John and Dominique de Menil first revealed Rothko Chapel to the public over three days, February 26-28, 1971. Since its dedication, the Rothko Chapel has served as a spiritual space, a forum for world leaders, and a space for solitude and gathering. Founded on a platform of radical inclusiveness far ahead of its time, the Chapel has long operated at the vanguard of social justice, hosting colloquia for scholars and religious leaders from around the globe to engage in discussions on issues affecting human rights, and to work towards a culture of mutual understanding.

In her book, An Act of Faith, Susan J. Barnes states that when it opened, "the Rothko Chapel . . . became the world's first broadly ecumenical center, a holy place open to all religions and belonging to none. It became a center for international cultural, religious, and philosophical exchanges, for colloquia and performances. And it became a place of private prayer for individuals of all faiths."

On that same weekend 50 years later, the Rothko Chapel celebrated its 50th anniversary with a series of events throughout the year that honor the Chapel’s legacy, spanning the breadth of offerings that the Chapel is known for—from performances and interfaith experiences to discussions and conversations on the critical issues of the day—reinvigorating the Chapel’s renown for inspiration and contemplation.

This anniversary celebration also marks the recent completion of phase one of the Opening Spaces master plan that will allow the Chapel to better fulfill its dual mission: to offer a space for ecumenical and interfaith celebration and contemplation, as well as to foster community engagement on critical social issues. This project included the comprehensive restoration of the Chapel, which more closely aligns the building with the original vision of Mark Rothko and John and Dominique de Menil. The skylight, lighting design and entryway were reconfigured in concert with the original concept for the space, allowing for heightened illumination and an unimpeded interaction with the 14 Rothko panels. In undertaking the Opening Spaces campaign, the Rothko Chapel leadership has made an investment in the future and has preserved the legacy of the sacred space for future generations.

“For half a century now, the Rothko Chapel has filled a unique and iconic place in Houston and the world – as both a place of solace and reflection and as an organization working actively toward human rights and justice,” says Michael Piana, chairman of the Chapel’s Board of Directors. “With the Opening Spaces project, it is our intention to preserve the Chapel and make it an ever more dynamic presence for future generations.” 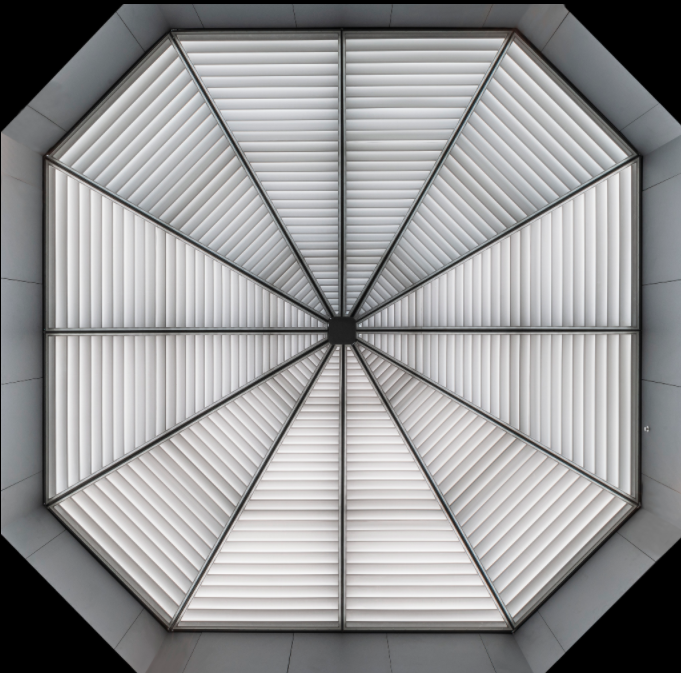 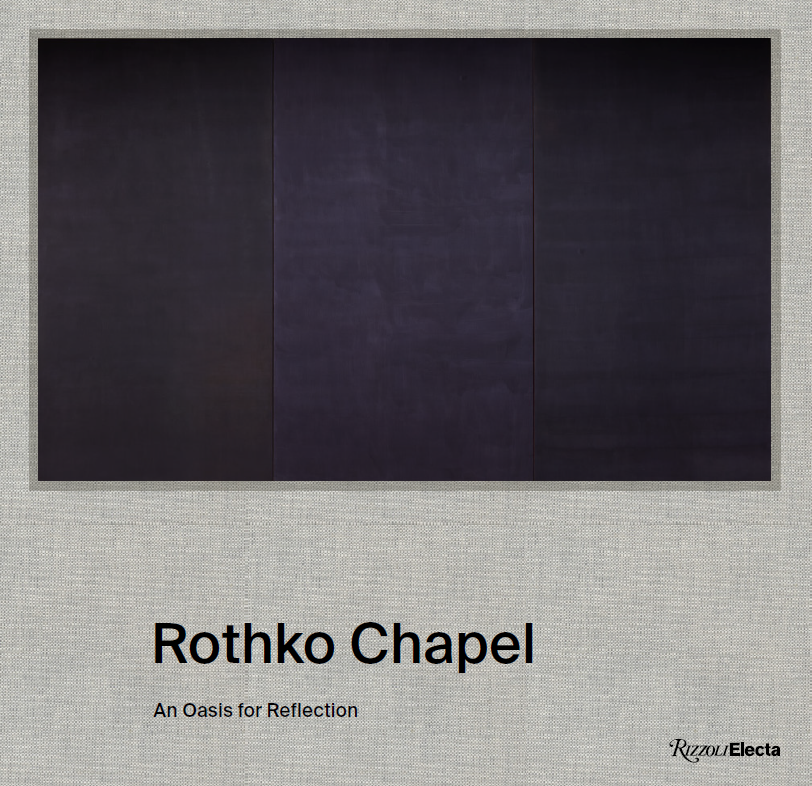 Published by Rizzoli Electa, this beautiful new large-format volume provides photographic testimony along with the insights of scholars who give an intimate look into this sacred space, where visitors seek solace and inspiration. Commemorating the first monograph on Rothko Chapel in more than 20 years, the book’s contributors speak about the Rothko Chapel’s history and how the restoration project came to fruition. 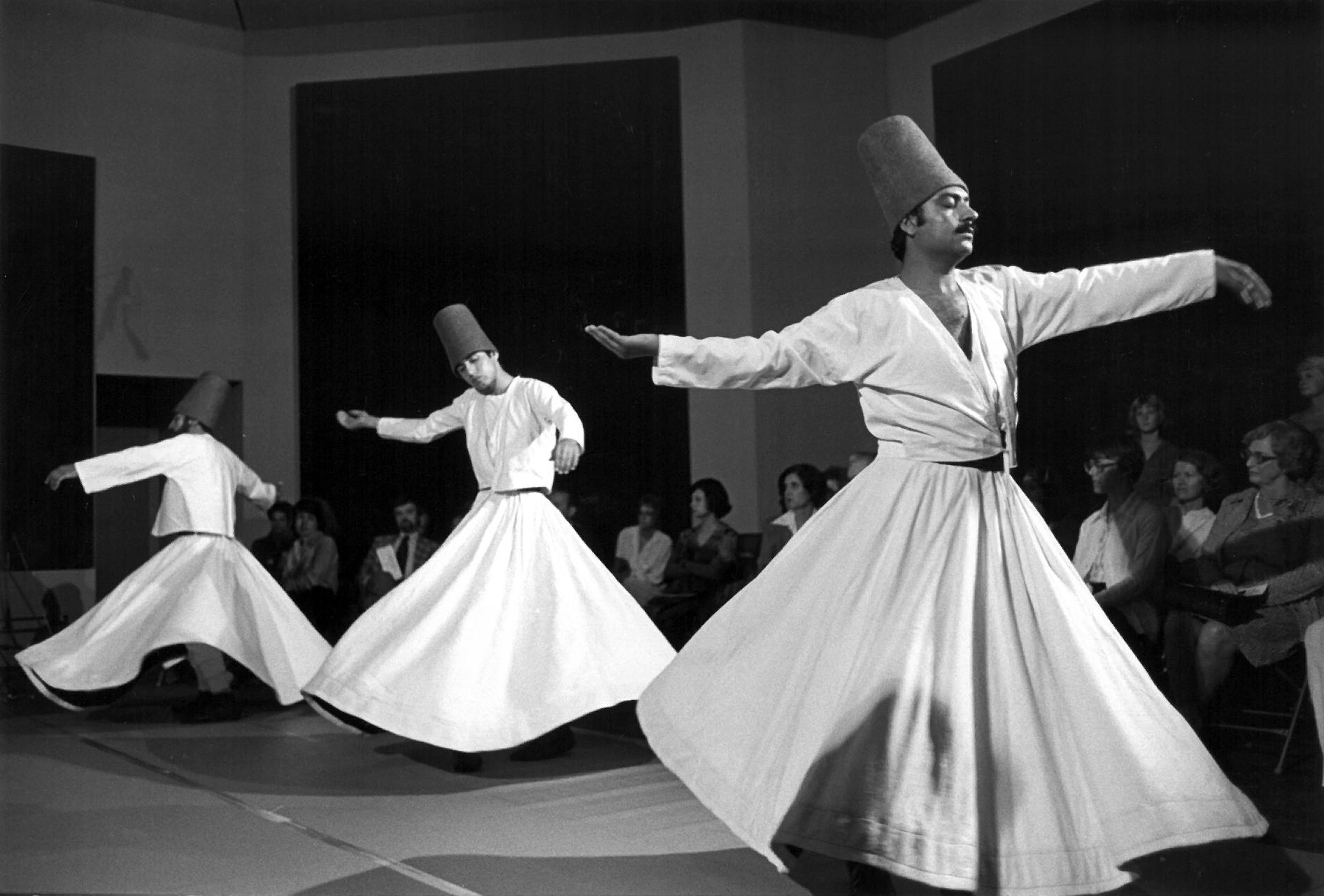 To lift up the last 50 years of the Rothko Chapel’s work and mission, and renew and strengthen its commitment to serve as a welcoming interfaith sanctuary for all and a place to rally around the significant human rights issues of the day, the Chapel will hold an interfaith service and human rights celebration including Sufi Whirling, prayers, reflections, and music. 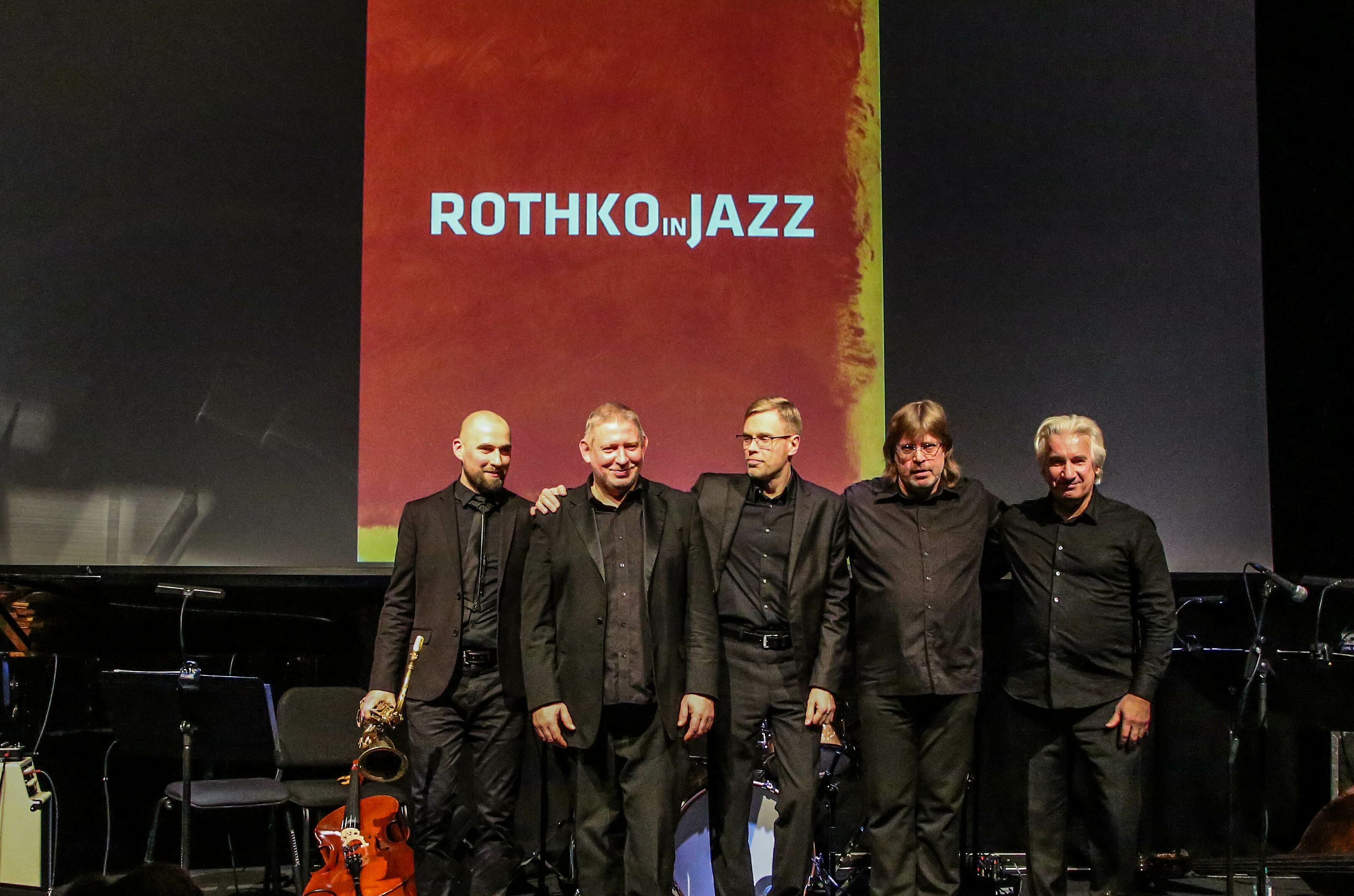 In honor of Mark Rothko’s Latvian heritage, Latvian jazz ensemble the Māris Briežkalns Quintet, one of the leading acoustic mainstream bands on the Latvian jazz scene, commissioned ten Latvian composers to each create an original jazz composition, arranged and performed by the Quintet. Each composition is created to illustrate the moods and atmosphere evoked by an iconic Rothko painting selected by the composer. 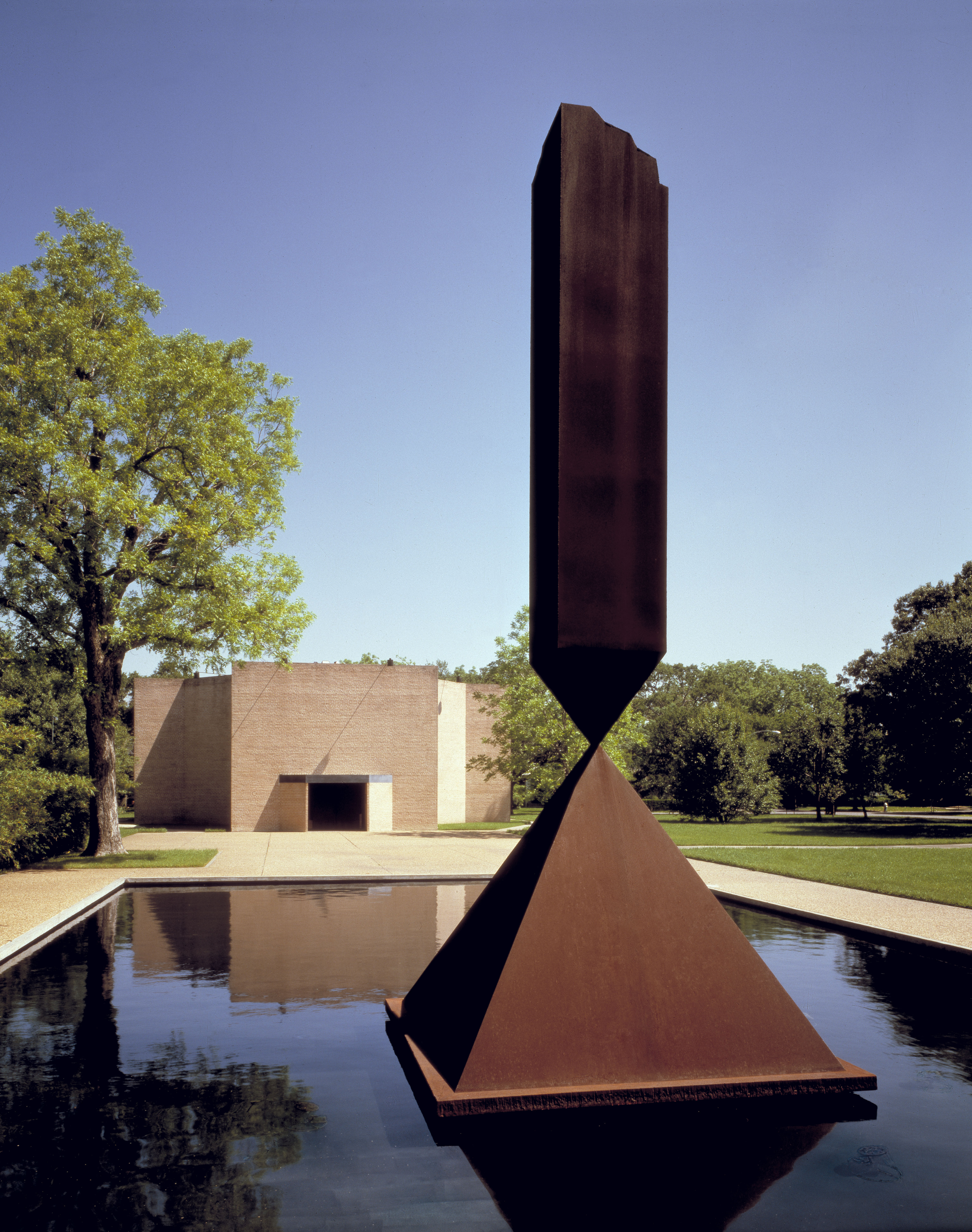 In partnership with the Moody Center for the Arts

This special event coincides with the virtual screening of the short version of Francois de Menil's documentary "The Rothko Chapel" (1972), including an interview with the Chapel's founders, Dominique and John de Menil. The screening will be followed by a conversation between Francois de Menil, renowned architect and son of Dominique and John de Menil, and David Leslie, executive director of the Rothko Chapel, moderated by Frauke V. Josenhans, Associate Curator at the Moody Center for the Arts. The discussion will be centered on the challenges of filming the non-denominational space, and both speakers will evoke the emotional and transcendental power of the Chapel as well as its humanistic vocation. 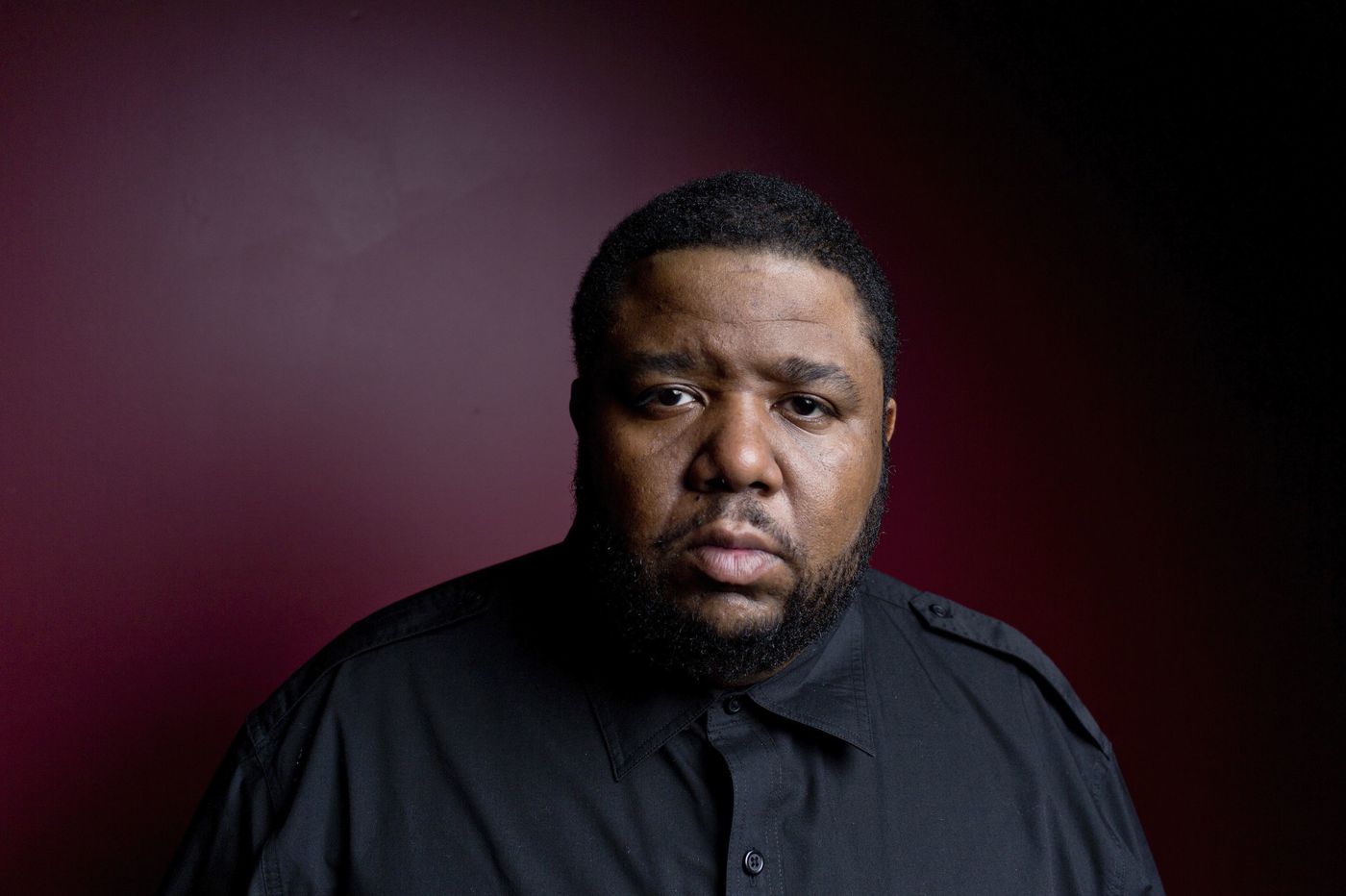 Rothko Chapel and DACAMERA have co-commissioned one of America’s leading composers to create a new work in celebration of the Chapel’s 50 years. The new work will premiere during the 50th anniversary year of the premiere performance of the Morton Feldman’s masterwork Rothko Chapel in 1972.

The Chapel's 50th Anniversary celebrations began in June of 2020 with the Rothko Chapel Óscar Romero Award ceremony and extends through the Rothko Chapel Co-Commission with DACAMERA in 2022. Find a full playlist of program recordings on our Vimeo profile.

About the Rothko Chapel

The Rothko Chapel is a contemplative space that successfully interconnects art, spirituality and compassionate action through a broad array of public programs and community initiatives. It is open to the public every day of the year at no charge. Founded by Houston philanthropists Dominique and John de Menil, the Chapel was dedicated in 1971 as an interfaith, nonsectarian sanctuary, and invites visitors from around the world to experience the power and sanctity of Mark Rothko’s monumental paintings. The Rothko Chapel is an independent non-profit organization whose mission is to create opportunities for spiritual growth and dialogue that illuminate our shared humanity and inspire action leading to a world in which all are treated with dignity and respect.