Over the next year, each Twelve Moments will highlight the role of music and sound in spiritual practices, and how these practices sustain us in the face of current challenges and injustices. For the month of December, the Rothko Chapel presented a meditation in the Christian tradition, led by representatives from Wheeler Avenue Baptist Church Music Ministry. Organized by Music Minister Leon Lewis (keyboard) and featuring Sabrina Gatson (vocals) and Jamie Perry (violin), this contemplative performance explored the history and significance of gospel music in the Baptist tradition.

About the presenters
Wheeler Avenue Baptist Church is a worshiping, witnessing and welcoming congregation committed to a spirit of excellence in the praise of the Almighty God through Jesus Christ; the Christian Education of children, youth and adults for the maturation in the faith; and worldwide ministry for the promotion of peace and justice in every aspect of life. In March of 1962, 13 pioneering worshipers assembled in the lounge of Texas Southern University’s Baptist Student Union for the sole purpose of establishing an ecclesiastical form of expression through which the worship of God and service to mankind could co-exist. Led by Founding Pastor Rev. William A. Lawson until 2004 and by Senior Pastor Rev. Dr. Marcus D. Cosby today, the congregation has grown to over 12,000 members and a multitude of ministries. To learn more visit wheelerbc.org.

Vocalist Sabrina Gatson is a graduate of HSPVA now Kinder High School for the Performing and Visual Arts and studied Classical Music Performance at Texas Southern University and Lamar University.

Jamie Perry began studying violin at age 5 in Houston, Texas. Her love for music expanded through the years and as her career began to flourish, she began to explore many genres including Classical, Gospel, Jazz, and R&B. She attended the Royal Academy of Music in London, England where she earned her Bachelor’s Degree in Music with a principal study in Violin Performance. She is currently the Violinist at Wheeler Avenue Baptist Church and the Assistant Orchestra Director at Booker T. Washington HS here in Houston. She has also begun her solo music career and composed her new EP “Driving Music”, which is available on all streaming platforms. She gives all praises to God for the opportunity to serve others through her ministry. 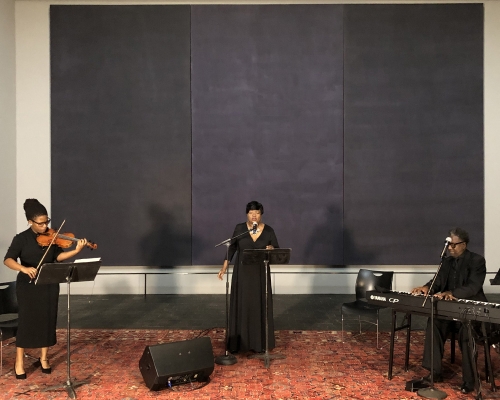