The theme for International Women’s Day in 2018 was “Press for Progress” – the worldwide campaign calls for changing stereotypes, promoting positive visibility of women and celebrating the achievements of women. Responding to this theme and the #MeToo movement, the Chapel hosted a small display of The Monument Quilt, a quilted collection of stories from survivors of rape and abuse. The Monument Quilt is organized by FORCE, a Baltimore-based activist collective dedicated to upsetting rape culture.

In the evening we hosted a Twilight Meditation facilitated by Claire Villareal from Dawn Mountain Center for Tibetan Buddhism, along with Shanti Flagg, FORCE's Studio Director, sharing quilting stories from the many woman all over the U.S. who are survivors of sexual and domestic abuse. Join as we unite in advocacy and support of women around the world.

Shanti Flagg was onsite before and after the meditation to answer questions about FORCE and The Monument Quilt project and to guide visitors in contributing a message to be added to the project.

About the presenters:
FORCE: Upsetting Rape Culture is a creative activist collaboration to upset the culture of rape and promote a culture of consent. FORCE designs communications campaigns to generate media attention and get millions of people talking. The organization gained national attention for their viral panty prank, where they pretended to be Victoria’s Secret promoting consent themed slogans on underwear. Today, FORCE is most widely known for The Monument Quilt, a quilted collection of stories from survivors of rape and abuse. Learn more at upsettingrapeculture.com

Shanti Flagg is an artist and has been a collective member at FORCE for 3 years. She directs the operations of their studio headquarters in Baltimore. The project Shanti primarily works on is the Monument Quilt. She coordinates volunteers in the studio to create the quilts, and she works with the Monument Quilt Leadership Team to plan the culminating display of the Quilt on the National Mall. The Monument Quilt creates public healing space for survivors of rape and abuse.

Claire Villarreal PhD, a native of Fort Worth, TX, has been practicing and studying Buddhism since 1997.  She completed her undergraduate studies, including two years of Tibetan language study with Dawn Mountain co-founder Anne C. Klein, with a bachelor’s degree in Religious Studies at Rice University in 1999.  Next she traveled to Thailand, where she trained with Theravada Buddhist monastics, and she has spent time in India and Nepal practicing and studying Tibetan Buddhism.  Returning to Texas, Claire has taught mindfulness in a variety of settings in Fort Worth and Houston since 2004.  She defended her dissertation, on the interface between contemplative practice and philosophical developments in Tibet, at Rice with Anne as advisor in spring of 2015.  She administers Dawn Mountain’s programs, teaches meditation, and practices kung fu.

About International Women's Day:
International Women's Day (IWD) is a global celebration of the social, economic, cultural and political achievements of women. The day also marks a call to action for accelerating gender parity. IWD has been observed since in the early 1900's - a time of great expansion and turbulence in the industrialized world that saw booming population growth and the rise of radical ideologies. For more information, visit internationalwomensday.com 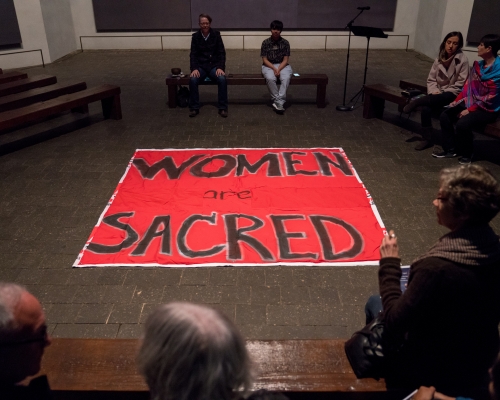