**All in-person attendees must wear a mask that covers their nose and mouth at all times, and will be required to show EITHER proof of a negative COIVD-19 test result within 72 hours of the event OR proof of vaccination AND photo identification upon check-in. Visit the Rothko Chapel’s Health & Safety information for more details.

In partnership with Houston Grand Opera, the Rothko Chapel presented Songs for Murdered Sisters, a live premiere of music by composer and pianist Jake Heggie, conceived and performed by baritone Joshua Hopkins, and featuring original poems by celebrated Canadian novelist and poet Margaret Atwood. Co-commissioned by Houston Grand Opera and Canada’s National Arts Centre Orchestra, this work features eight songs written from poems by Atwood confronting violence against women. The live premiere at Rothko Chapel included a post-performance discussion with the composer and vocalist with Khori Dastoor, General Director and Chief Executive Officer of Houston Grand Opera, and moderated by Alexandra Smither, soprano and Communications Coordinator at Houston in Action. Learn more about upcoming programs in the Songs for Justice series.

About Songs for Murdered Sisters
On September 22, 2015, Nathalie Warmerdam (née Hopkins), beloved sister of baritone Joshua Hopkins, was murdered by her ex-boyfriend on the same day he killed two other women, Anastasia Kuzyk and Carol Culleton, in a crime spree that is now recognized as one of the worst cases of domestic violence in Canadian history. In his guilt, grief, and anger, Hopkins conceived of the song cycle that would become Songs for Murdered Sisters. According to Crime Stoppers, almost half of all female homicides in the U.S. are committed by former and current intimate partners. In Harris County, intimate partner violence has grown by an estimated 40 percent during the COVID-19 pandemic. Songs for Murdered Sisters is dedicated to the memory of Nathalie, Carol, & Anastasia and Pat Lowther & Debbie Rottman.

Jake Heggie is the composer of the operas Dead Man Walking, Moby-Dick, It’s A Wonderful Life, If I Were You, Great Scott, and Three Decembers, among others. He has also composed nearly 300 songs, as well as chamber, choral and orchestral works. The operas – most created with Gene Scheer or the late Terrence McNally – have been produced on five continents. Dead Man Walking (McNally) recently received its 70th international production, making it the most-performed American opera of our time. New York’s Metropolitan Opera recently announced it will produce Dead Man Walking in a bold new production by director Ivo van Hove, conducted by Yannick Nézet-Séguin. Heggie has served as a mentor for the Washington National Opera’s American Opera Initiative and is a frequent guest artist at universities, conservatories, and festivals throughout the USA and Canada. He lives in San Francisco. Photo by Ellen Appel. jakeheggie.com.

and Opera's Incoming General Director and CEO. Khori is an entrepreneurial and data-driven leader with a proven record of organizational transformation and a clear vision for the future of opera. Previously, Khori tapped into her vast experience and leadership abilities to transform Opera San José (OSJ). Khori is not only an exceptional leader but an artist herself. Her long association with Opera San José began in 2007, when she joined the resident ensemble of principal artists as a lyric soprano before taking her voice tostages throughout North America, Europe, and Asia. In 2013 she returned to Opera San José as Artistic Advisor to the General Director, and then as the Director of Artistic Planning. During her tenure with OSJ, sheprioritized role debuts, provided audiences with the opportunity to hear exciting new artists, and producedsome of the biggest successes in the company’s history, including the American premiere of Alma Deutcher’s Cinderella, and a critically acclaimed new production of Jake Heggie’s Moby-Dick. Additionally, Khori has served as Associate Director of the Packard Humanities Institute, responsible for initiatives encompassing arts, music, and archaeology, and as Director of the San Francisco District of the Metropolitan Opera National Council Auditions.

An adventurous performer and one of the CBC’s 2017 “30 Young Hot Classical Musicians Under 30”, Canadian soprano Conversationalist/Moderator Alexandra Smither is a fresh fixture on the worldwide stage. Her “sunny, cloudless top” and “silky, light, soprano” are an organic fit in staple repertoire of Mozart and Monteverdi; Ms. Smither’s signature rapport with new music has led to her projects in her 2021/22 season including the premiere of ...Iphigenia, a new opera by Wayne Shorter and Esperanza Spalding and the premiere of Illuminate by Katherine Balch with the California Symphony. Ms. Smither also works as the Communications Coordinator at Houston in Action, a collective impact organization in Houston. She organizes with Stop TxDOT I-45, a group opposing the expansion of the I-45 freeway, and volunteers with other grassroots groups throughout the city. Ms. Smither is a Young Artist with DACAMERA. 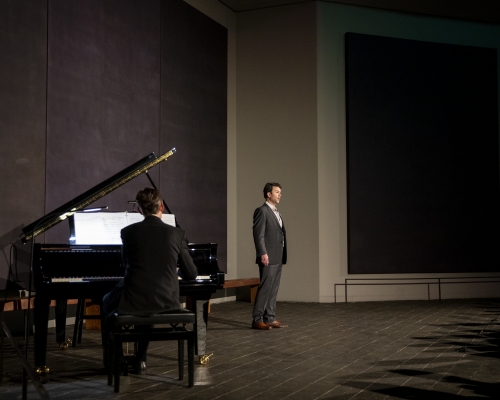