The Rothko Chapel's biennial Óscar Romero Award has been given every two years since 1986 in recognition of courageous, grassroots human rights advocacy. The award is named in honor of Archbishop Óscar Romero of San Salvador who was assassinated on March 24, 1980, because of his vocal opposition to the violent oppression of his fellow citizens.

Building upon climate change topics addressed at our 2019 Spring Symposium: “Toward a Better Future: Transforming the Climate Crisis,” the Chapel will honor three recipients who are committed to climate justice, and together represent the Chapel's intersection of art, spirituality and human rights.

The virtual ceremony was led by David Leslie, Executive Director of the Rothko Chapel and an invocation was given by Myokei Caine-Barrett, Shonin, the Resident Priest of Myoken-ji Temple in Houston.

Gérman Chirinos is a land and water rights activist from Honduras. Over the past 10 years, protected and publicly held lands in southern Honduras have been privatized, and large-scale energy projects and logging have limited access to water and land. Motivated by this growing environmental crisis, Gérman joined other activists in 2014 to found the Southern Environmental Movement for Life (Movimiento Ambientalista del Sur por la Vida) or MASSVIDA, an association of 37 communities in active resistance to the destruction of land and water. There have been two attempts on Gérman’s life. When asked what difference the award will make for MASSVIDA, Gérman said: “We will no longer be silenced, our work will become known.”

Bernadette Demientieff is the Executive Director of the Gwich’in Steering Committee and she is Gwichyaa Zhee Gwich’in. She was raised in Fort Yukon and spent her summers in Venetie. Bernadette’s great grandmother was Marcis (Horace) Moses from Old Crow in the Canadian Territory of Yukon, and her grandfather, Daniel Horace, is from Fort Yukon, Alaska. Her parents are Betty (Walter Flitt) of Alaska and Bernard (Melanie) Hornsby of Louisiana. Bernadette is the mother of 5 children and grandmother of 5 beautiful grandchildren. She takes this position very seriously and it has transformed her life to better serve her people. Bernadette stands strong to protect the Arctic National Wildlife Refuge-Coastal Plain, the Porcupine Caribou Herd and the Gwich’in way of life. Bernadette is a council member for the Arctic Refuge Defense Council. She also serves as an advisory board member for NDN Collective, the Care of Creations Task Force, Native Movement Alaska, and Defend the Sacred Alaska. She is a tribal member of the Gwichyaa Zhee Gwich’in Tribal Government, and on the leadership council for ITR. When asked about her years of advocacy, Bernadette said, "We must all remember that we are on a spiritual path and that co-existing and respecting each other’s ways of life is important."

Jorge Díaz co-founded AgitArte in 1997 and is an editor of the book When We Fight, We Win! He is a puppeteer, popular educator and bicultural organizer with over 25 years of experience. He is deeply committed to working class struggles against oppressive systems, namely colonialism, patriarchy, white supremacy, and capitalism. Jorge is also a founding member of Papel Machete, a collective of radical artists and street theater/puppetry workers dedicated to education, agitation and solidarity work in 21st century Puerto Rico and its Diaspora. He received his BA in Mass Communication from Emerson College in Boston, MA. Jorge strives to be a rigorous, organic intellectual and is based in his hometown of Santurce, PR. Upon announcement of receiving the award, Jorge said, "I take this award as an opportunity to reaffirm my individual commitment to continue in the collective struggle for a life in which we can be free from violence."

This program was underwritten by The Jacob and Terese Hershey Foundation. Additional support is provided by the City of Houston through the Houston Arts Alliance, the Houston Endowment, and the Brown Foundation. To support the Rothko Chapel Óscar Romero Award, donate here. 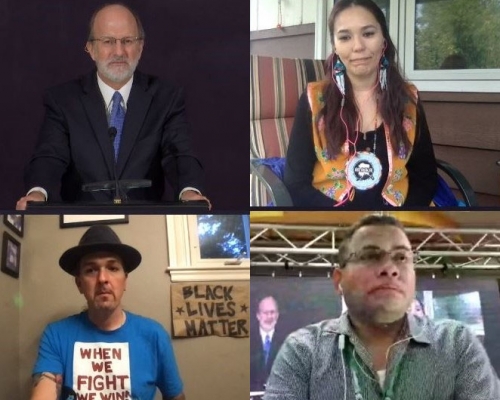