Celebrating the life and legacy of the Rev. Dr. Martin Luther King, Jr., the Rothko Chapel, in partnership with the Barbara Jordan – Mickey Leland School of Public Affairs at Texas Southern University, presented a conversation exploring the influence of MLK and the Civil Rights Movement on the environmental justice movement. Scholars, activists and community leaders explored the evolution of the environmental justice movement, continued environmental challenges and inequities faced by vulnerable and frontline communities, and actions being taken to improve the health of the region.

This program was presented as part of the Rothko Chapel’s two-year programmatic initiative exploring climate change's impact on individuals around the world, culminating with the biennial Rothko Chapel Óscar Romero Award for Human Rights in 2020.

Dr. Robert D. Bullard is Distinguished Professor of Urban Planning and Environmental Policy at Texas Southern University in Houston. He is often called the “father of environmental justice.”  Professor Bullard is author of eighteen books. His latest books include Race, Place and Environmental Justice After Hurricane Katrina (2009), Environmental Health and Racial Equity in the United States (2011), and The Wrong Complexion for Protection (2012). In 2018, the Global Climate Change Summit named professor Bullard one of 22 Climate Trailblazers and in 2019, Apolitical named him one of the world’s 100 Most Influential People in Climate Policy.

Yvette Arellano serves as a policy research and grassroots advocate with Tejas. In 2015, they led the campaign against H.R. 702, which opened the floodgates to U.S. crude oil exports. Yvette represented the Gulf South at COP25. Yvette was instrumental in the publication Double Jeopardy in Houston, Air Toxics and Health in the Houston Community of Manchester and most recently Plastic and Health: The Hidden Cost of a Plastic Planet. They strive to emphasize that the Rights of Nature are fundamental to overall existence. Currently, Yvette is leading efforts in Houston to help stop petrochemical expansion fueled by plastic production.

Bridgette Murray is the founder and Executive Director of the non-profit organization Achieving Community Tasks Successfully (ACTS). She is a long time resident of the Pleasantville community having served as the President of both the Pleasantville Civic League (PCL) and Pleasantville Area Super Neighborhood Council #57. In 2013, Murray established ACTS to support community activities in the areas of social and environmental justice. Murray recognizes Pleasantville’s vulnerabilities and strives to strengthen community resiliency for all generations. She holds a BS in Nursing from Baylor University and an MBA from the University of Houston, and is retired from M.D. Anderson Cancer Center.

Richard M. Mizelle, Jr. is an Associate Professor of History and Director of Graduate Studies at the University of Houston. His research focuses on historical understandings of health and healthcare politics, medical citizenship, environmentalism and health, medical technology, race, gender, and ethnicity in medicine, and the transformation of disease identity. He is the author of Backwater Blues: The Mississippi Flood of 1927 in the African American Imagination and co-editor of Resilience and Opportunity: Lessons from the US Gulf Coast after Katrina and Rita. He is currently working on a history of race and diabetes in America. 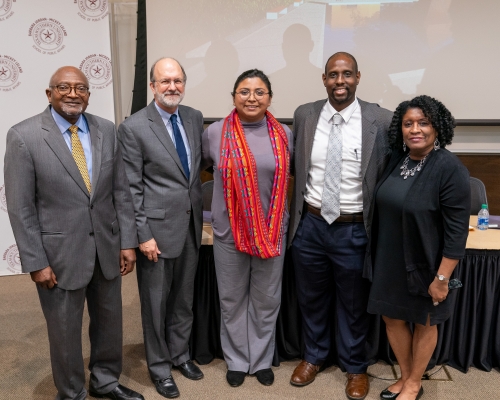