Pierre Claver Mbonimpa is Executive Director of Association pour la Protection des Droits Humains et des Personnes Détenues (Association for the Protection of Prisoners and Human Rights), an organization that documents and reports on human rights violations with an emphasis on those committed against incarcerated people in Burundi. APRODH provides legal advice and judicial accompaniment, monitors prisons and jails, fights against torture and sexual violence, and publically and vocally condemns human rights violations regardless of who commits them. Pierre Claver is referred to as the grandfather of Burundi’s human rights movement. He was one of a few activists who, despite the country’s insecurity, not only remained in Bujumbura but also continued to denounce human rights violations and the harassment of human rights defenders. In remaining outspoken, he knowingly put himself in danger and has been attacked, imprisoned and faced assassination attempts.

Kathryn Griffin Griñán is the Human Trafficking Director for the Precinct One Constable’s Office in Harris County, the creator and Director of a re-entry program in Harris County Jails called “Been There, Done That,” and the Program Coordinator at the Texas Department of Correction’s Plane State Jail (Henley Unit) for her program “Our Road to Freedom.” In addition to rehabilitating women who have been victims of human trafficking and prostitution, she also serves as an airline ambassador, training others on how to spot sex trafficking victims. Kathryn’s no nonsense approach in healing and rehabilitating victimized women, children, and men, and her ability to reach the hearts of those she helps is a result of her personal experiences with childhood sexual abuse and the harsh world of prostitution until the age of 43. After a long a long battle with drug abuse resulting in incarceration in numerous jails, prisons and over 22 rehab centers, today Kathryn is beginning her 15th year of sobriety and has committed her life to saving the lives of others.

Berta Cáceres, a Lenca indigenous woman, was a founding director and general coordinator of Consejo Civil de Organizaciones Populares e Indígenas de Honduras. She defended the rights of campesino and indigenous Lenca descendant FPO communities of western Honduras for more than two decades. Berta was assassinated on March 2, 2015 in her home in La Esperanza, Honduras. The Chapel stands in solidarity with the COPINH and the Fund for Global Human Rights in demanding an immediate investigation into Cáceres’ murder.

Miriam Miranda, a Garifuna woman, is executive director of Organización Fraternal Negra Hondureña. The group protects the land, civil, and cultural rights of 47 indigenous Garifuna communities. The two women shared a strong solidarity and friendship. When Berta was threatened and criminalized, Miriam’s organization responded through an emergency grant. When Miriam was kidnapped, Berta was the first to denounce the act.

Blanca founded CAT in 2001 with a few other young, female labor rights activists to promote the rights of workers in Mexico’s garment and auto-parts industries in the state of Puebla.  Formerly a maquila worker herself, Blanca’s work to support the rights of this primarily female workforce puts her up against powerful, often corrupt and violent actors.  The CAT office has been vandalized numerous times and Blanca has received death threats over the years, including very recent threats that followed the kidnapping and torture of a CAT member.

“This award has given me confidence and has made me more consistent in my role as a human rights defender. It has helped me gain a political status that allows me to carry on denouncing violations and demanding recognition for our work.”

2011
Nassera Dutour, Collective for the Families of the Disappeared in Algeria and SOS Disparus, Algeria

Nassera Dutour is the mother of one of Algeria’s “disappeared.” In January 1997, her son Amine, twenty-years-old at the time, left his home to buy pastries for the evening’s iftar (breaking of the fast during Ramadan). He never returned.  In 1998, she founded Collectif Des Familles de Disparu(e)s en Algérie (Collective of Algerian Families of the Disappeared) to press the government to investigate cases of disappearance.  For thirteen years Nassera has worked tirelessly for information regarding Algeria’s thousands of disappeared while advocating for democratic transformation of the Algerian government.

“This award represents a protection of human rights. It gives me more strength, ambition, and determination to continue on the path we have set for the creation of a state law in Algeria.”

Through the Volunteer Office in the Service of Children and Health, Dr. Namegabe has promoted the rights of children affected by armed conflict and has supported grassroots organizations in monitoring, documenting, and reporting on children’s rights violations in eastern Congo.  Dr. Namegabe’s risky and difficult negotiations with armed rebels to release conscripted children and to cease armed conflict have steadily and quietly improved the lives of thousands. Due to his careful documentation and advocacy, child recruitment is now a crime under Congolese military and national law.  Over the years he has quietly and steadily improved the lives of thousands.

“This award not only gave BVES critical financial support … but also the opportunity for me to advocate for additional security protections for our organization as we faced a multitude of threats and dangers.”

Daniel Strauss found three seriously dehydrated migrants in a desert arroyo on July 9, 2005. Conscientiously following the protocol agreed upon between the human rights organizations and the Border Patrol, the young volunteers put the seriously ill migrants into their vehicle and drove toward Tucson for medical help. On their way, they were arrested by the Border Patrol and charged with two felonies under federal law: for conspiring and transporting illegal aliens. Torture Abolition and Survivors’ Support Coalition, International, established in 1998, is a coalition of survivors, currently representing more than 60 countries and ethnic groups. This organization calls for abolition of torture and mistreatment and hopes to achieve it through education, advocacy, and legislation. It also fosters the creation of international communities to aid in healing survivors of torture and their families. Sr. Dianna Ortiz, an Ursuline nun, survived imprisonment and torture in Guatemala while serving as a missionary teacher of Mayan children.

After three years of compulsory military service and an additional eighteen months as a career officer, Ishai Menuchin still performs the annual service as an officer in infantry units. He became politically active during the war on Lebanon by joining “Peace Now” and subsequently helped found Yesh Gvul as a leading activist and spokesman for the movement.

In 1994, Salima Ghezali became Algeria’s only woman newspaper editor when she took over La Nation, a French language weekly with a circulation of 60,000. Under her leadership, La Nation refused to handle “security-oriented” news, which had to be submitted to the authorities for censorship. Mrs. Ghezali openly favored the Contrat National (the Rome or St. Egidio platform) which called for a negotiated solution to Algeria’s conflict. For that support, La Nation was suspended four times and seized three times between 1995 and 1996. Mrs. Ghezali was continuously under threat of kidnapping, torture, and death.

Abdennour Ali Yehya, an attorney and former government minister, distinguished himself under various regimes by his persistent denouncement of human rights violations and by his tenacity to uphold legal safeguards for the victims. He was one of the first to report the existence of concentration camps and to denounce arbitrary arrests, mass deportation, torture and violence in Algeria. He was arrested, detained, and deported for his struggle for freedom and the defense of his fellow citizens. Mr. Yehya was the key negotiator in drafting and signing the Contrat National (the Rome or St. Egidio platform) which established a fundamental basis for a political, peaceful, and just solution to the Algerian crisis.

Oslobodjenje, a daily newspaper run by a multi-ethnic, multi-religious team of journalists in Sarajevo, was established during World War II as the voice of liberation. Their unity of purpose and their commitment to democracy expressed the fundamental hope of the people in Bosnia-Herzegovina. Warring Serbs systematically tried to destroy this symbol of multi-ethnic cooperation, yet the Sarajevo daily continued to be printed and distributed under bombing, sniper fire, and critical survival conditions. Oslobodjenje continued to be the voice of truth and freedom.

Monseñor Quezada was the moving force that initiated and maintained dialogue between  the different parties and organizations. During a series of meetings held in Norway, Spain, Canada, Peru, and Mexico, he, as the principle mediator between the Guatemalan government and the Guatemalan National Revolutionary Unity, obtained from both parties a commitment to find a peaceful settlement to the political, social, and economic problems of the country.

Bishop Gómez of the Resurrection Lutheran Church of the Salvadorian Synod, was honored for his courageous support of peace and human rights in El Salvador. As violence escalated in El Salvador, the Lutheran Church expanded its work with the poor and the displaced. Bishop Gómez, church leaders, and members suffered harassment, threats, capture, and torture for their stand in support of peace and reconciliation, and their commitment to the most vulnerable people.

Cardinal Arns, archbishop of Sao Paulo, Brazil, an internationally known human rights advocate, was chosen for his long and indefatigable efforts on behalf of the poor and for his remarkable courage in confronting the terrorism of the military regime that held power from 1964 to 1985. One of his most extraordinary accomplishments was the surreptitious collecting from military archives of detailed documentation concerning secret detentions, torture, and execution of thousands of the “disappeared.” The documents were published in a book called Brazil: Nunca Mais (Brazil: Never Again).

Bishop Proaño, “Bishop of the Indians” as he was called, confronted many obstacles and conflicts in defense of the Indians, both in the struggle for land reform and in his effort to improve the inter-ethnic relationship marked by discrimination and economic exploitation. 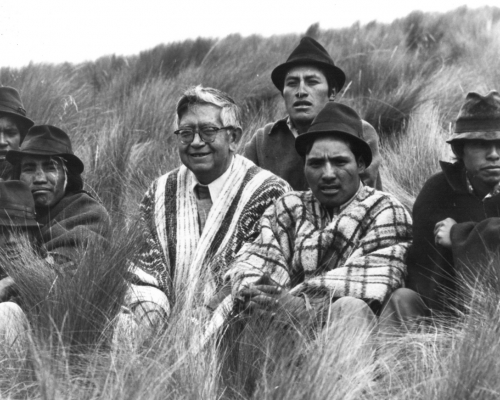