Over the next year, each Twelve Moments will highlight the role of music and sound in spiritual practices, and how these practices sustain us in the face of current challenges and injustices. For the month of November, the Rothko Chapel presented a meditation in the Bön Buddhist tradition, led by Tibetan Lama Geshe Denma Gyaltsen and Tibetan meditation teacher, Alejandro Chaoul of Ligmincha Texas. Join for a session of Tibetan meditation using seed syllables, comprised of three vocalized sounds that connect and awaken your body, speech, and mind. Each seed sound will be explored first individually then combined to promote clarity and balance amidst the stressors of a pandemic, hurricanes, wildfires, and election season.

About the presenters
Dr. Alejandro Chaoul is the founding director of The Jung Center's Mind Body Spirit Institute (MBSI) and holds a doctoral degree in religious studies from Rice University. He is currently an adjunct faculty member at UT Medical School and MD Anderson Cancer Center, where since 1999, he has been leading people with cancer and their family members through mind/body/spirit techniques aimed at reducing stress and facilitating healing. He has also engaged in research to assess the benefits of these practices in different populations. Dr. Chaoul is the author of Tibetan Yoga for Health and Well-Being and Chöd Practice in the Bön Tradition. Dr. Chaoul has personally studied Buddhist practices and traditions with His Holiness the Dalai Lama, Löpon Tenzin Namdak and Tenzin Wangyal Rinpoche.  He brings over 20 years of experience as a teacher of Bön Buddhism and Tibetan yoga.  His affiliation with the Ligmincha Institute has given him the opportunity to instruct throughout the United States, Latin America, and Europe. He is also a senior teacher of the 3 Doors program and has been recognized as a Fellow of the Mind & Life institute. Dr. Chaoul serves as an advisor of the Rothko Chapel.

Geshe Denma Gyaltsen is the resident lama of Ligmincha Texas. He arrived in Houston in January 2016 to serve as Ligmincha Texas’s first resident lama. Geshe Denma was born in northern Nepal. His father brought him to Menri Monastery, India, regarded as the mother Bon monastery in exile, in 1981 to begin his program of study toward the Geshe degree. He received all the Bon teachings, initiations and transmissions in sutra, tantra and dzogchen from His Holiness Lungtok Tenpai Nyima Rinpoche, the 33rd Menri Trizin, and His Eminence Yongdzin Tenzin Namdak Rinpoche. When he became a senior student, he was asked to teach philosophy to younger students. He successfully completed this degree program in 1996 and was awarded the Geshe certificate, which is considered equivalent to a Ph.D. in Bön Buddhist philosophy and religion. Geshe Denma was an accomplished teacher and in 1998 was appointed, with the approval of the Tibetan government in exile, first abbot of Zhu Rishing Yungdrung Kundak-Ling Monastery, a Bon Monastery in Sikkim, India by His Holiness. He served two terms in this capacity until 2003. In addition, from the time he graduated until 2008, Geshe Denma also was active in assisting Geshe Nyima Dakpa with the Bon Children’s Home, which houses many children in Dolanji, India, providing them with food, healthcare and free education. 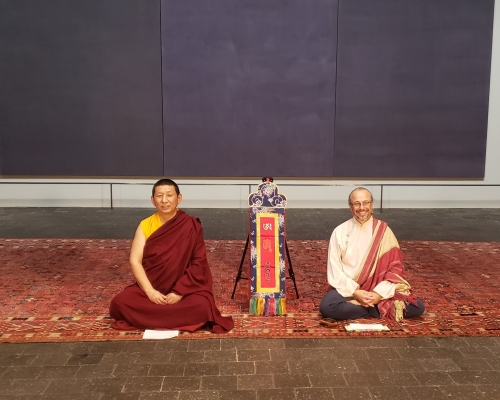