The 2019 lecture will featured Ruth Wilson Gilmore, a renowned activist and public scholar known for her work on prison abolition. Gilmore is professor of Earth & Environmental Sciences and American Studies, as well as Director of the Center for Place, Culture, and Politics at the Graduate Center of the City University of New York. In addition to her scholarly work, Professor Gilmore co-founded several grassroots organizations, including the California Prison Moratorium Project, Critical Resistance, and the Central California Environmental Justice Network.

Gilmore spoke to over two hundred students, faculty, and activists at Texas Law about the role of community organizing and transnational coalition-building in prison abolition struggles. Her lecture also served as the opening keynote for a Rapoport Center conference on “Prison Abolition, Human Rights, and Penal Reform: From the Local to the Global.” Gilmore acknowledged Sissy Farenthold as “a model for all of us in the struggles that we wage in our daily lives.”

Gilmore, a co-founder of several grassroots organizations, including the California Prison Moratorium Project, and a scholar of racial capitalism, carceral geography, and labor and social movements, spoke about the impact of grassroots prison abolition advocacy on mass incarceration in California, and on raising barriers to prison expansion more broadly. Gilmore argued that prison abolition activism is not a single-issue struggle, but rather a framework that requires coalitional work, both nationally and transnationally: “a practical program of change, rooted in how people sustain and improve their lives, cobbling together insights and strategies from disparate, connected struggles.” She demonstrated how an informal coalition of farmers, farm workers, environmental justice activists, prisoners and their allies, and elected officials worked to halt further prison building in California by debunking the myth that prisons bring economic prosperity to the communities where they are built and by educating people about the real social harms produced by mass incarceration.

About the Farenthold Lecture series:
In line with Sissy’s own history of exposing and responding to injustices and inequality as both a public servant and citizen, the lecture series brings to Austin and Houston internationally renowned scholars, activists and politicians who will inspire their audiences to think and act creatively to respond to some of the greatest challenges of the 21st century. Click to view previous speakers. 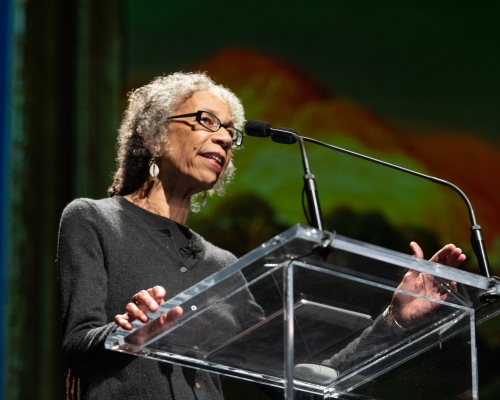