The Holocaust Museum Houston and Rothko Chapel hosted an early celebration of International Human Rights Day. Human Rights Day is observed every year on the December 10th, which is the anniversary of the day that the United Nations General Assembly adopted, in 1948, the Universal Declaration of Human Rights.

The evening began with a contemplative practice led by Rabbi David Segal, organized by Rothko Chapel, followed by a tour of Human Rights Gallery led by the HMH Education Department. Keynote speaker, Kamil Khan, who currently serves as the Community Engagement Coordinator at Interfaith Ministries for Greater Houston, spoke about his experience working with asylum seekers and refugees.

About the presenters:
Rabbi Segal is the Texas Lead Organizer for the Religious Action Center of Reform Judaism. He works with Reform Jewish congregations throughout the state to help them deepen their justice work and build effective interfaith coalitions at the local and state level.

Kamil worked in a refugee camp on the Thailand-Myanmar border where he was a Vocational Specialist for refugee adults between the ages of 20-25. He has worked for the UNHCR Thailand where he helped process asylum cases and provided culturally-sensitive linguistic services to asylum seekers from Pakistan. Prior to joining Interfaith Ministries, Kamil was working as an Employment Specialist at the International Rescue Committee in Boise, Idaho; he provided employment services to refugees from DR Congo, Myanmar, Ukraine, Syria, Eritrea, and Afghanistan. 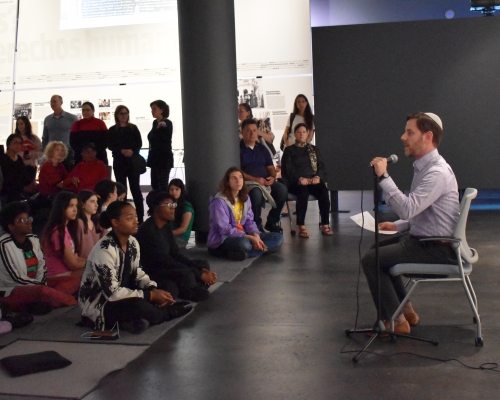