Concert, Members of Silkroad Ensemble
Pay What You Can, suggested contribution $20

The International Day of Peace ("Peace Day") is observed around the world each year on the 21st of September. Established in 1981 by unanimous United Nations resolution, Peace Day provides a globally shared date for all humanity to commit to Peace above all differences and to contribute to building a Culture of Peace. To learn more about International Day of Peace, click here.

Yo-Yo Ma conceived Silkroad in 1998 as a reminder that even as rapid globalization resulted in division, it brought extraordinary possibilities for working together. Seeking to understand this dynamic, he began to learn about the historical Silk Road, recognizing in it a model for productive cultural collaboration, for the exchange of ideas and tradition alongside commerce and innovation. And in a radical experiment, he brought together musicians from the lands of the Silk Road to co-create a new artistic idiom, a musical language founded in difference, a metaphor for the benefits of a more connected world.

Today, these Grammy Award-winning artists seek and practice radical cultural collaboration in many forms, creating and presenting new music, teacher and musician training workshops, and residency programs in schools, museums, and communities. Silkroad has recorded seven albums. Sing Me Home, which won the 2016 Grammy for Best World Music Album was developed and recorded alongside the documentary feature The Music of Strangers, from Oscar-winning director Morgan Neville.

About the Artists:
Honolulu-born bassist Shawn Conley won a position with the Honolulu Symphony while in high school and went on to earn degrees in Music Performance from Rice University. Conley won the 2009 International Society of Bassists Jazz Competition, was a semifinalist in the Thelonious Monk Jazz Competition, and received a Wagoner Fellowship. He has performed with Sting, Peter Gabriel, and Emanuel Ax, among many others. He teaches at the Hawaii Contrabass Festival and regularly performs with The Hot Club of Detroit, The NOW Ensemble, and The Knights.

Violist Nicholas Cords has devoted his career to the advocacy of music drawn from a strikingly broad historic and geographic spectrum. Nick serves as one of Silkroad’s inaugural co-artistic directors. He is also a founding member of the string quartet Brooklyn Rider and a member of The Knights. Nick performs internationally as an acclaimed soloist and guest chamber musician. His recent solo recording, Recursions, features music ranging from Biber to his own compositions. A prize-winning violist in his student days at the Juilliard School and the Curtis Institute, he currently teaches in the graduate program at Stony Brook University in New York.

Tabla virtuoso Sandeep Das is one of the few Indian classical musicians to have collaborated with major symphony orchestras, string quartets, and jazz musicians. Das is the founder of HUM (Harmony and Universality through Music), which promotes global understanding through performance and education, and provides learning opportunities and scholarships for young, specially-abled artists to empower them to lead self-reliant lives. Das is trained in the centuries-old Indian tradition of Guru-Shishya Parampara, studying and living with his Guru—Pandit Kishan Maharaj—and learning and practicing music as a way of life, more than just an art form. Sandeep has been an artist in residence at universities including Dartmouth, Brandeis, UC Santa Barbara, UC Santa Clara, College of the Holy Cross, Juilliard School of Music, Berklee School of Music, and UC British Columbia.

Edinburgh born harpist and composer Maeve Gilchrist has been credited as an innovator on her native Celtic Harp (Clársach) due to her uniquely rhythmic and improvisational approach to the instrument. Currently based in Brooklyn NY, Maeve tours internationally as a solo artist and with a variety of projects including a duo with percussive dance master, Nic Gareiss, a more electronics-based collaboration with Nashville-based bass player and composer, Viktor Krauss and as part of the multi-disciplinary quartet ‘Edges of Light. She has performed and recorded with such luminaries as Darol Anger, Ambrose Akinmusire, Nir Felder, Frankie Gavin, Esperanza Spalding, Tony Trischka, Alasdair Fraser, Solas and Vardan Ovsepian. Last fall, Maeve premiered her original concerto for symphony orchestra and harp with the Western Piedmont symphony orchestra in North Carolina as a co-composition with Luke Benton. She’s since composed a number of pieces including a three-movement Samuel Beckett-inspired piece for harp, string quartet and sound samples which was premiered at the Edinburgh International Harp Festival in the spring of 2019. She is a regular visiting artist at the Berklee College of Music and has had a number of  instructional books published by Hal Leonard. Maeve is an Adventure Music recording artist.  'Both Fascinating and Absorbing in equal measure, an Original Voice' (Scotsman)

Kaoru Watanabe is a Brooklyn-based composer and musician who specializes in the Japanese shinobue flutes and taiko drums. Watanabe creates music that is at once personal, philosophical, meditative and virtuosic, that reflects his extensive background in Japanese traditional music, American jazz and his decades-long devotion to cross-cultural musical collaboration. Watanabe was a performer and artistic director of the internationally acclaimed Japanese taiko performing arts ensemble Kodo for close to a decade and who, as a soloist, has worked with such artists as National Living Treasure Bando Tamasaburo, jazz pianist Jason Moran, flamenco dancer Eva Yerbabuena and Yo-Yo Ma and the Silkroad Ensemble. In February 2018, Watanabe debuted as an orchestral soloist and composer with the Sydney Symphony at the Sydney Opera House. He is also the featured taiko drummer and a musical advisor for the recent Wes Anderson film, Isle of Dogs. Watanabe has performed his compositions at such prestigious venues as Carnegie Hall, Lincoln Center, The Kennedy Center and Kabukiza, has performed in all 47 prefectures in Japan as well as across the North, Central and South Americas, Europe, Asia and Australia. As a passionate educator, Watanabe has taught courses at Princeton and Wesleyan Universities, has been a faculty member at Tanglewood Music Festival. Watanabe also has a studio in Brooklyn that holds regular classes as well as hosts workshops by international master musicians and dancers.  Watanabe is supported by the preeminent taiko maker Miyamoto Unosuke Shoten of Tokyo and master shinobue flute maker Ranjo of Chiba Prefecture. 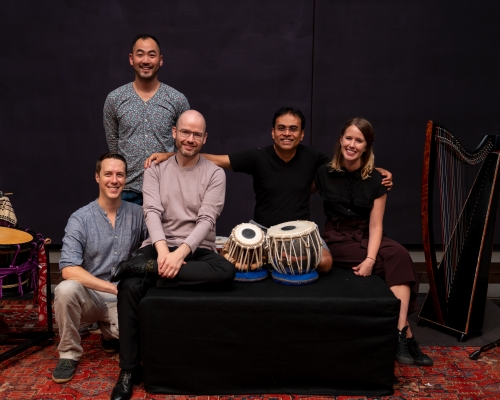