Summer Solstice Observance at the University of St. Thomas

Summer Solstice Observance
Offsite: Labyrinth in the Gueymard Meditation Garden at the University of St. Thomas, Houston (corner of W Alabama & Mt Vernon Streets, next to the Chapel of St. Basil on campus)

Labyrinth Walk by Jay Stailey & Performance by Laura Lucas and John Edward Ross
​Pay What You Can, suggested contribution $10

The Rothko Chapel celebrated the summer solstice with a morning labyrinth walk and music at the labyrinth in the Gueymard Meditation Garden at the University of St. Thomas, Houston. The morning observance included a labyrinth walk facilitated by Jay Stailey, accompanied by musical performances by Laura Lucas (flute) and John Edward Ross (guitar).

About the presenters:
Jay Stailey, a Rothko Chapel Guild founding member, and former Houston-area public school administrator discovered the power of the labyrinth as a tool to focus his thoughts, clear his mind, and tune his inner being. His curiosity and interest broadened as he became a Veriditas trained and certified labyrinth facilitator, and leading him to become Houston’s first labyrinth coach. He has emerged as a fixture in the Houston labyrinth community, facilitating monthly labyrinth walks at the Historic Freedmen’s Town Labyrinth, guiding Houstonians on discovery walks and bicycle tours, and facilitating the construction of temporary and permanent labyrinths with Houston-area churches and schools. He has installed labyrinths for Core Dance performances in Atlanta, Georgia, on the Fourviere in historic Lyon, France, and on the equator in the cloud forests of Ecuador. He presented at The Labyrinth Society Fall 2016 Gathering in Houston, on “Building Community through the Labyrinth Experience.” Future labyrinth projects in Ireland, Mexico, Ecuador and Italy (in partnership with the Houston Grand Opera) loom on the horizon.

Laura Lucas earned her Master of Music in flute performance and Performers Certificate from Temple University in Philadelphia. She commenced teaching public school strings in 2000 and received her all-level music teaching certification in 2003. Working for Project GRAD, her responsibilities included the co-direction of Orchestras and instruction of violin, viola, cello, and double bass for students in grades K-5. Since 2013, she works as Orchestra Director & Fine Arts Team Lead at Crockett Elementary Magnet School for the Performing and Visual Arts in HISD. Ms. Lucas is an active freelance musician, private lesson instructor, and co-owner of Sassafras Studio.

This event was included in a series of offsite programs presented by the Rothko Chapel in partnership with Houston-area organizations while the Chapel is closed for restoration. The Rothko Chapel and grounds are closed to the public, to reopen in early 2020. This temporary closure is the first part of the implementation of the Rothko Chapel Opening Spaces master plan, focused on preserving the Chapel as a unique public art site and spiritual space, serving the growing number of visitors and program participants, and setting the stage for programmatic expansion. 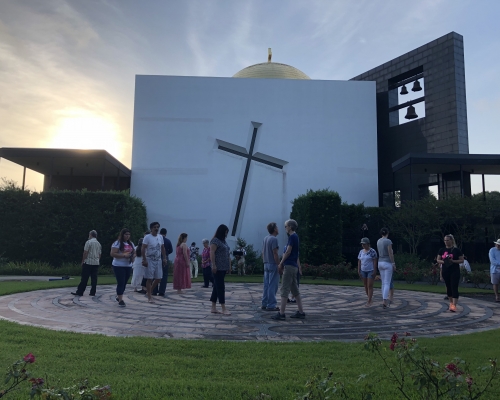