Join Former US Ambassador to Burundi, Robert Krueger in conversation with Tony Tate, Program Officer for Sub-Saharan Africa at the Fund for Global Human Rights and Dr. Methode Butoyi, Certified Family Wellness Instructor and Training Specialist at the Alliance for Multicultural Community Services, moderated by Dr. Kerry Ward, professor of history at Rice University, as they explore the social and political dynamics of Burundi, east Africa. The international awardee for the 2017 ORA, Pierre Claver Mbonimpa, works with wrongly incarcerated individuals in Burundi.

About the presenters:
Mwalimu Methode-Alain Butoyi, PhD was born and raised in the Cibitoke province of Burundi. Butoyi came to the US in July 1971, on a Fulbright scholarship to pursue his studies at UCLA.  In April 1972, two months before he was to return home, selective genocide started in Burundi. The US State Department renewed scholarship and he completed an MA and PhD in French and African Studies at UCLA. He taught French for 30 years at the university and high school levels and served international refugees for over 18 years in California and Texas. He is currently a Family Wellness Instructor and Training Specialist in Houston at the Alliance for Multicultural Community Services. His services include Cultural Orientation, mentoring and vocational ESL. His Refugee Healthy Marriage program trains new refugees in behavioral patterns that hold a family together and enhance communication skills. This is paramount when dealing with past trauma and emotional upheaval. It is an invaluable tool that helps keep families together as they learn to adjust to a new way of life, as they position themselves to become citizens of the United States with a keen sense of freedom and independence, knowing, saying and getting what they want.

Robert Krueger is a former US Representative and US Senator from Texas, and served as US Ambassador on three occasions: to Mexico, Burundi, and Botswana; and additionally as US Special Representative to the Southern African Development Community. During his service in Burundi, Krueger’s outspokenness on human rights issues provoked an ambush of his convoy in which two persons were killed and eight grievously wounded. Former President Bill Clinton, addressing seven African presidents in Washington said, “Our symbols need to be people like US Ambassador Krueger, who risked his life to keep people alive in Burundi.” Nobert Ndihokubwayo, member of Burundi Parliament said, “An ambassador out of the ordinary, he went to the country side to see for himself the atrocities committed against a population afraid to speak out. He viewed massacre sites and visited the wounded at their hospital beds. This man of peace and exceptional courage contributed immensely to the defense of human rights for the population of Burundi; even today, his name reminds people of the love and hope that he gave to the people of Burundi.” His book on living amid genocide in Burundi, From Bloodshed to Hope in Burundi, was published in 2007 by the University of Texas Press. Krueger holds a Ph.D. from Oxford University, and served as a Professor of English and as Vice Provost and Dean of Arts and Sciences at Duke University. He currently lives with his family in New Braunfels, Texas.

Tony Tate began working with the Fund for Global Human Rights as the program officer for Sub-Saharan Africa in October 2010. He oversees the Fund’s grant making programs in Burundi, the Democratic Republic of the Congo and Uganda. Before joining the Fund, Tony was a program officer at Unbound Philanthropy, responsible for the development of the organization’s international programs. Prior to his work at Unbound Philanthropy, Tony worked for seven years as a researcher at Human Rights Watch, first as their in-country researcher in Burundi, later as the Africa researcher in the Children’s Rights Division. At Human Rights Watch, he investigated and published reports on human rights violations in numerous countries in central, eastern and southern Africa. In the 1990s, Tony worked as a case manager at the United Nations International Criminal Tribunal for Rwanda and as a Peace Corps volunteer in the Comoros Islands. He has a J.D. from the City University of New York School of Law, an M.A. in international affairs and African studies from Columbia University, and a B.A. from the George Washington University. Tony is a member of the advisory committee of the Children’s Rights Division of Human Rights Watch and is fluent in French and conversant in Swahili.

Dr. Kerry Ward is Associate Professor of world history at Rice University and the author of Networks of Empire: Forced Migration in the Dutch East India Company published by Cambridge University Press. She directs the African Studies Program and co-directs the Minor in Museums and Cultural Heritage at Rice. Her current research is on the British suppression of the maritime slave trade in the Indian Ocean during the emancipation era and on the long history of unfree maritime labor.  Ward was the co-director of the inaugural Rice Seminar in 2012-13 on Human Trafficking – Past and Present: Crossing Boundaries, Crossing Disciplines. The seminar created a dialogue between the historical dimensions of slavery and the emergence of illicit slavery and modern human trafficking and also focused on Houston as a major hub in human trafficking in the United States.

This program builds upon the topic of ending mass incarceration addressed at our 2017 Spring Symposium and this year's focus of our biannual Rothko Chapel's Óscar Romero Award, which recognizes courageous, grassroots human rights advocacy. This year the Chapel will honor two recipients, one internationally from Burundi and the other locally from Houston. To learn more about the Award Ceremony and other related programs please click here. 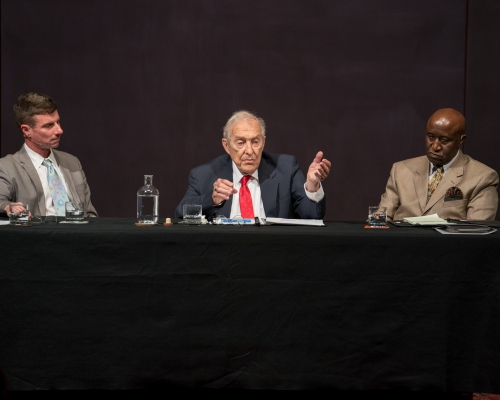