The 2013 Óscar Romero Award will be given to Ms. Blanca Velázquez Díaz, a champion of worker rights and dignity in Mexico. The twelfth such award given by the Rothko Chapel since 1986, this award honors unsung heroes who work under extraordinary circumstances to advance human rights. The award is named after Archbishop Óscar Romero of San Salvador, who was murdered on March 24, 1980 because of his opposition to violence and his courageous defense of the poor in his country.

Ms. Velázquez Díaz is the Director of the Centro de Apoyo al Trabajador (Center for Worker Support – CAT), which was founded in 2001 by Ms. Velázquez Díaz and a few other young, female labor rights activists to promote the rights of workers in Mexico’s garment and auto-parts industries in the state of Puebla.Â  Formerly a maquila worker herself, Ms. Velázquez Díaz’s work to support the rights of this primarily female workforce puts her up against powerful, often corrupt and violent actors. The CAT office has been vandalized numerous times and Ms. Velázquez Díaz has received death threats over the years, including very recent threats that followed the kidnapping and torture of a CAT member. She is currently living in a safe-house.

The Rev. Hannah E. Atkins is the Rector at Trinity Episcopal Church, and is a third generation Episcopal priest. She also served as Director of Theological and Christian Education in the Diocese of the Episcopal/Anglican Church of El Salvador and Associate Priest at St. John the Evangelist San Salvador.

Mr. Balde mar Velásquez is an American labor union activist. He co-founded and is president of the Farm Labor Organizing Committee, AFL-CIO. He was named a MacArthur Fellow in 1989, and awarded the Order of the Aztec Eagle in 1994, the highest honor Mexico can bestow on a non-citizen.

Ms. Dolores Huerta is a labor leader and civil rights activist who, along with César Chávez, co-founded the National Farmworkers Association, which later became the United Farm Workers. She has received numerous awards for her community service and advocacy for workers', immigrants', and womens' rights, including the Presidential Medal of Freedom. 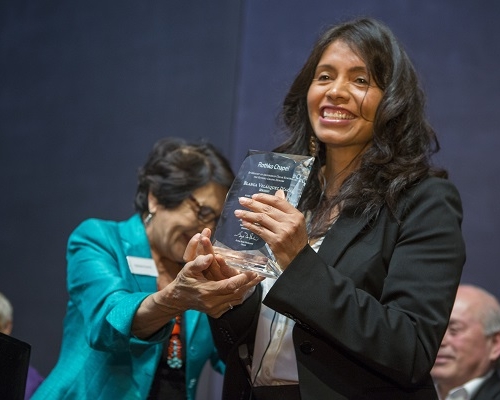