Darren Walker examined the intersection of the arts and human rights, and the need for artists and non-artists alike to engage more fully with the power of artistic expression in the instigation of social change. Darren Walker is the President of the Ford Foundation, the nation’s second largest philanthropy, and for two decades has been a leader in the nonprofit and philanthropic sectors. Prior to joining Ford, he was Vice President at the Rockefeller Foundation where he managed the rebuild New Orleans initiative after Hurricane Katrina. He had a decade long career in international law and finance at Cleary Gottlieb Steen & Hamilton and UBS. Educated exclusively in public schools, Darren received the “Distinguished Alumnus Award,” the highest honor given by his alma mater, the University of Texas at Austin. In 2016, TIME magazine named him to its annual list of the “100 Most Influential People in the World.” Growing up in Texas imbued in Darren a pride in the state and a commitment to closing the gap between the privileged and those who are excluded and live on the margins of society.

Congruent with Sissy’s own history of exposing and responding to injustices as both a public servant and citizen, the 2016 Frances Tarlton “Sissy” Farenthold Endowed Lecture in Peace, Social Justice in Human Rights inspires audiences to act creatively in response to the greatest human rights challenges of the 21st century. To learn more about Sissy and the Lecture Series, click here. A reception on the plaza follows in celebration of Sissy’s birthday.

Examine the intersection of arts and human rights 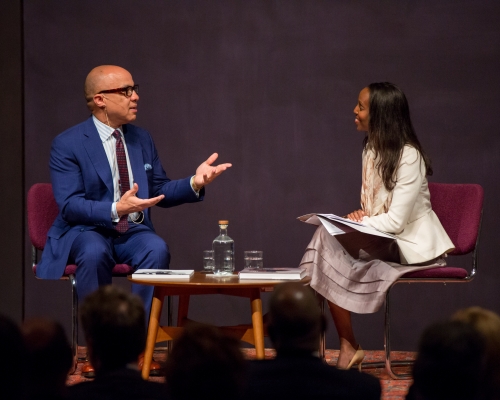